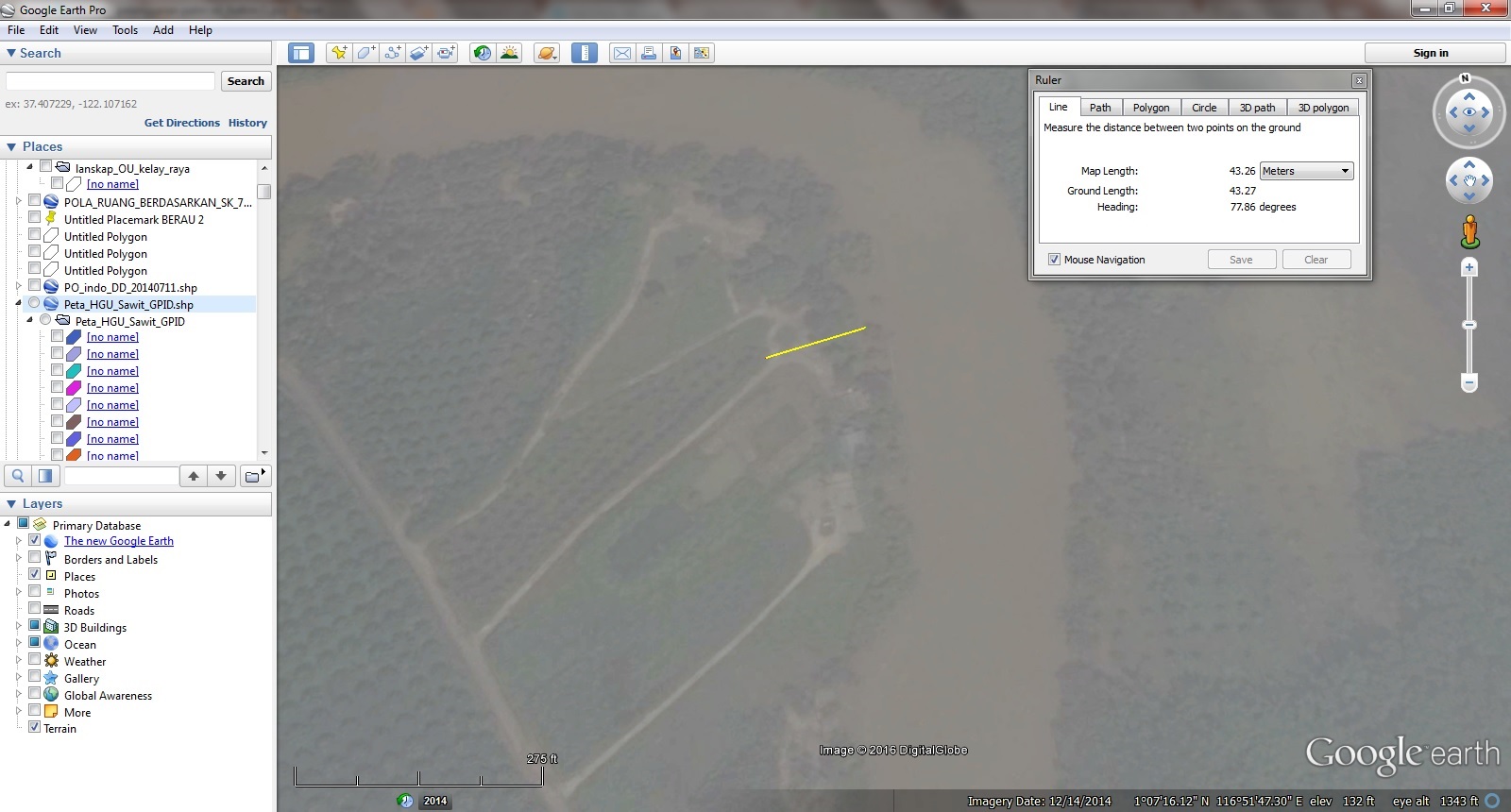 Palm oil industry in Indonesia increased with significant number both related to areas that released for concessions and other follow up fact related to production and income generated from this sector. Since 2006 Indonesia became number one CPO exporter, more than Malaysia.Indonesia and Malaysia covered 83% oil palm production worldwide.

Based on data from Ministry of agrarian  that oil palm concessions areas  in Indonesia in 2015 about 11.4 million hectares, with half of them owned by profit companies.

Distribution of  oil palm concession in Indonesia shown below: 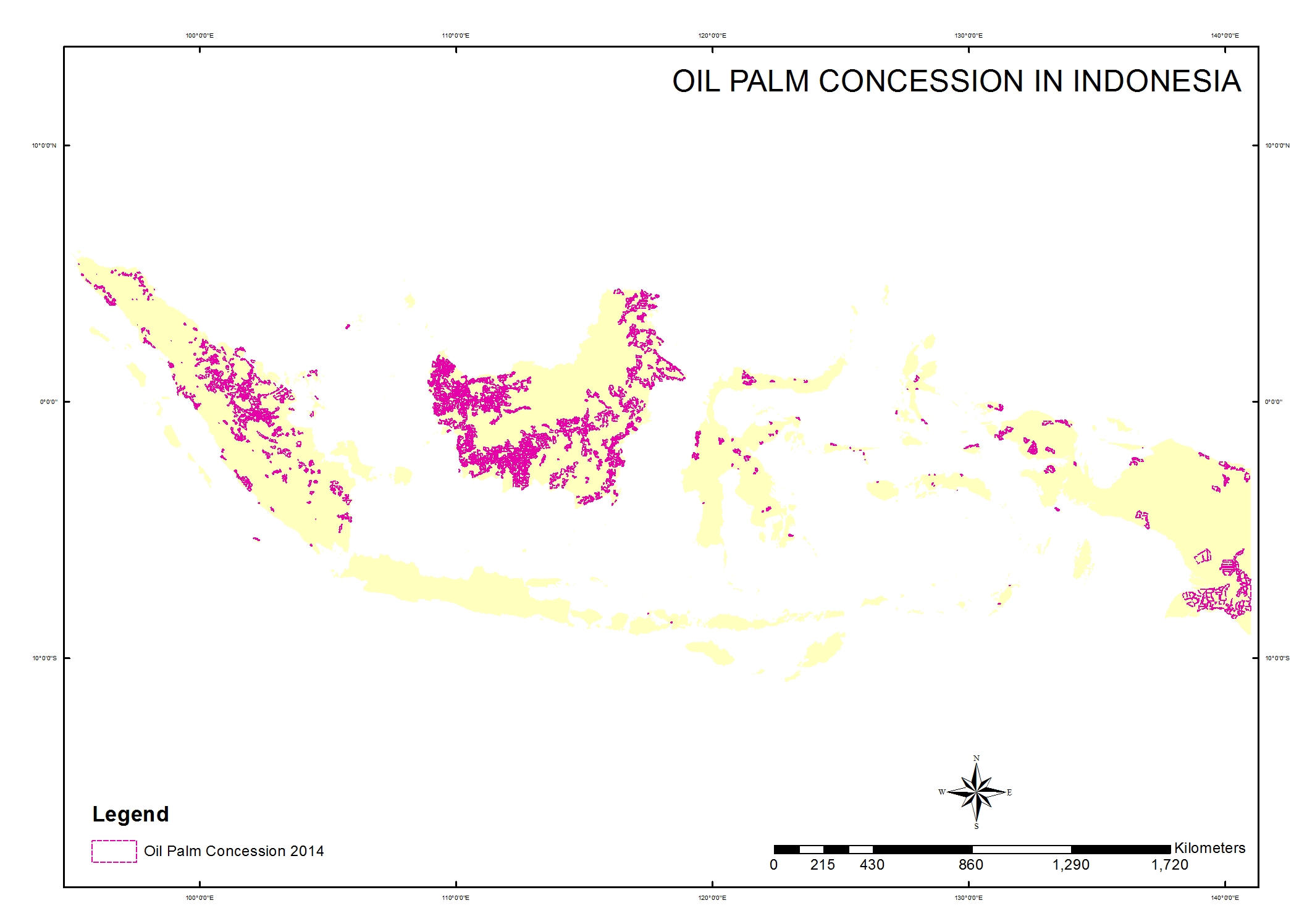 Oil palm sector is most dominated plantation sector in Indonesia, based on data from Ministry of Agriculture 2015 that oil palm covered 11.3 million hectares compared to others that only 3.6 million hectares  from rubber.

East Kalimantan also increased related to oil palm concession, based on data 2014 from Dinas Perkebunan/East Kalimantan Agriculture Office that in 2014 about 1.02 million hectares.

WRI Potico project published suitability analysis for oil palm based on environment, economic, legal and social aspect. This project came with recommendation for suitable areas for oil palm in Indonesia.

For transmigration program in Indonesia in 1980’s a series of map produced within Reppprot Project with suitability analysis for several agriculture type including oil palm. Suitability from this only based on physical aspects and not other and need to combined with spatial planning regulation.

Other research showing that primary forest and peat land land clearing probably not by small holders but by agro-industrial land developer. Larger development in  peat land are often accompanied by draining wetland and impacted on carbon emission beyond footprint of actual development.

Karst Sangkulirang – Mangkahaliat lies between Berau and East Kutai district. It is known for its unusual geology with limestone being formed by ancient coral reefs, and is one of the largest karst topographies in Southeast Asia about 420,000 acre wide. With jagged limestone formation, the area also has cavernous structure, which is important for underground aquifers.[1] The area has a significant amount of forest carbon stock, is home to unique biodiversity, and provides vital environmental services for local population.

Home to unique and endemic species, Karst Sangkulirang – Mangkahaliat is recognized by International Union for Conservation of Nature (IUCN) as a global center for plant biodiversity richness. It was also identified as one of the top 10 endangered karst ecosystems by international karst specialists[2].

Another research led by TNC in 2009 focused on the existence of endangered species in the area. The survey predicted a significant size of orangutan population exists in the Sangkulirang karst.

Karst Sangkulirang – Mangkahaliat has high economical value. The 240 caves in the areas are important for the collection of white and black swiftlets’ nests. The area also provides water sources for up to 90,000 people who inhabited the area. The population is spread into 8 villages and 3 new transmigration settlements.

There are five rivers from the area that flow to East Kutai district, and three rivers to Berau district. These rivers provide modes of transportation, clean water and irrigation to the communities.

Karst Sangkulirang – Mangkahaliat also provides a living to the residents, many of whom collect gaharu (Eagle wood), harvest wild honey – particularly among the Dayak communities- and other minor forest products. The area has its tourism potential, offering not only its beauty but also adventure through eco-tourism.

Out of some 240 caves in the area, a total of 30 sites show invaluable evidence of prehistoric arts. The area especially in Marang area is an archeological treasure. The caves are famous for Mesolithic (Middle Stone Age) paintings that are estimated to be 9,800 years old.[3] Decorating caves are known to be a part of spiritual and cultural activities in the prehistoric time.

But despites its ecological, scientific, socio-cultural and economic value, the area is constantly facing threats of degradation mostly caused by forest fire, illegal logging, treasure hunting, and conversion into farms, timber plantations and mines. The habitat alteration caused by these factors will have significant consequences for the biodiversity and also the people whose lives depend on the area. 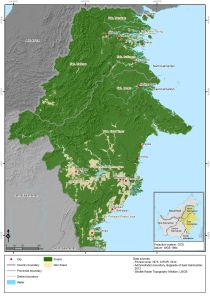 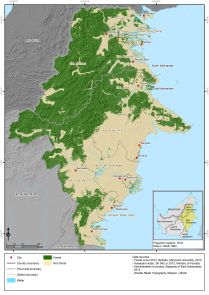